Got some good work done on this fellow so that I can finially say that he is one of my finished models, horray!  I am actually very pleased with how he came out as it is pretty much what was in my minds eye at the start of this project.  Note I have added black over the silver armour plates as it looks much more like the source material this way.

I intend to have a fair bit of variation in uniforms between “squads” in any event as it helps to distinguish them on the tabletop and looks visually interesting compared say to 120 identically painted Cadians.  The tri-colour badge with a “1” character on it means he is from the 3rd platoon 1st squad.  I would envision this chap as being a regular guardsman of the line and so he has 5 kill markings on his lasgun being a veteran of several skirmishes.  His metalic armour, originally painted a matt black (and possibly painted in different colours in an ad-hoc manner for the terrain) has chipped near the edges from the wear and tear of campaigning in the 41st millenium.  He bears a blue stripe on his helmet as he is from a tactical company.  Additionally on his back he bears a squad badge (an ace) with some personalisation (which helps me to distinguish him from his squad buddies).  What is difficult to see from the picture is the squad number on his left shoulder plate and a check pattern (more gang stlye personalisation) on his right shoulder plate. 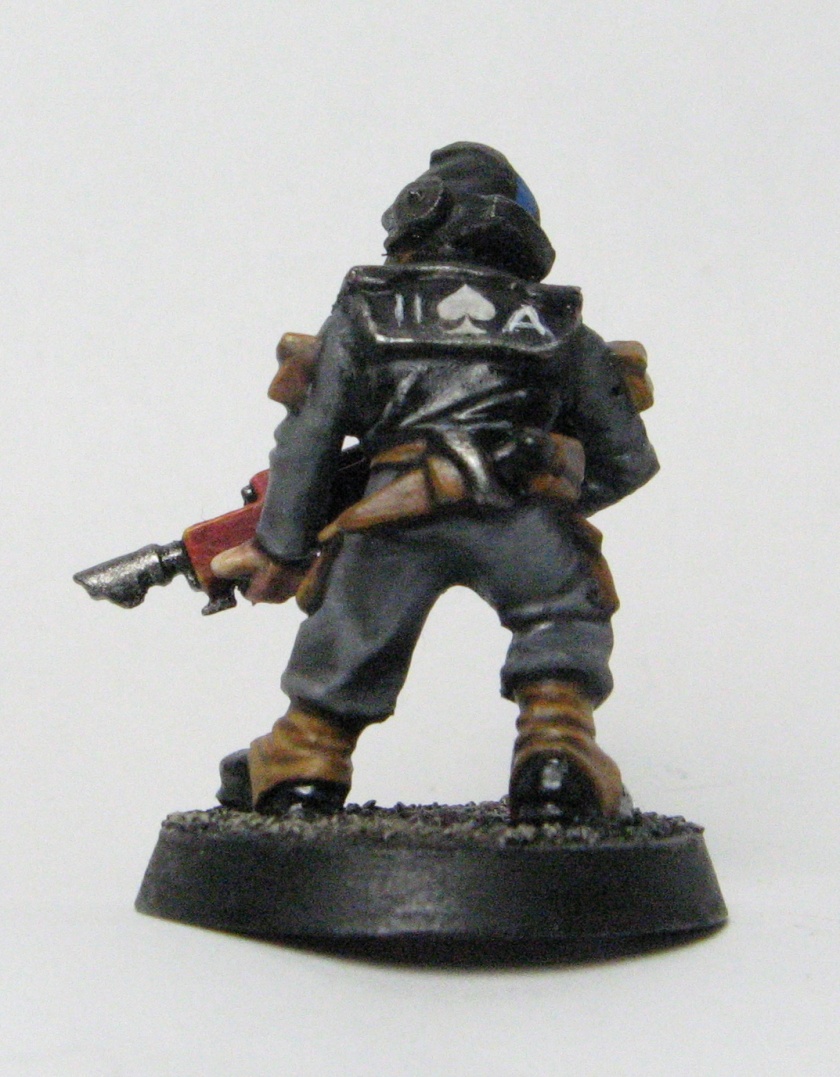 When I get around to doing “Whiteshields” (basically young newly trained Guardsmen) they will have much cleaner battlegear and bear a plain white badge with a white stripe on the helm.  Conversely when I do some grizzled veterans they will have much more personalisation with markings and non standard issue battlegear.  In this manner it will be easy to distinguish the experience level of models in the army for any potential opponent (as well as looking awesome).

Well it’s not really for Man O’War as none of my regular gaming buddies actually play that game anymore but it won’t stop me from having a go at scratch building an Ork ship. 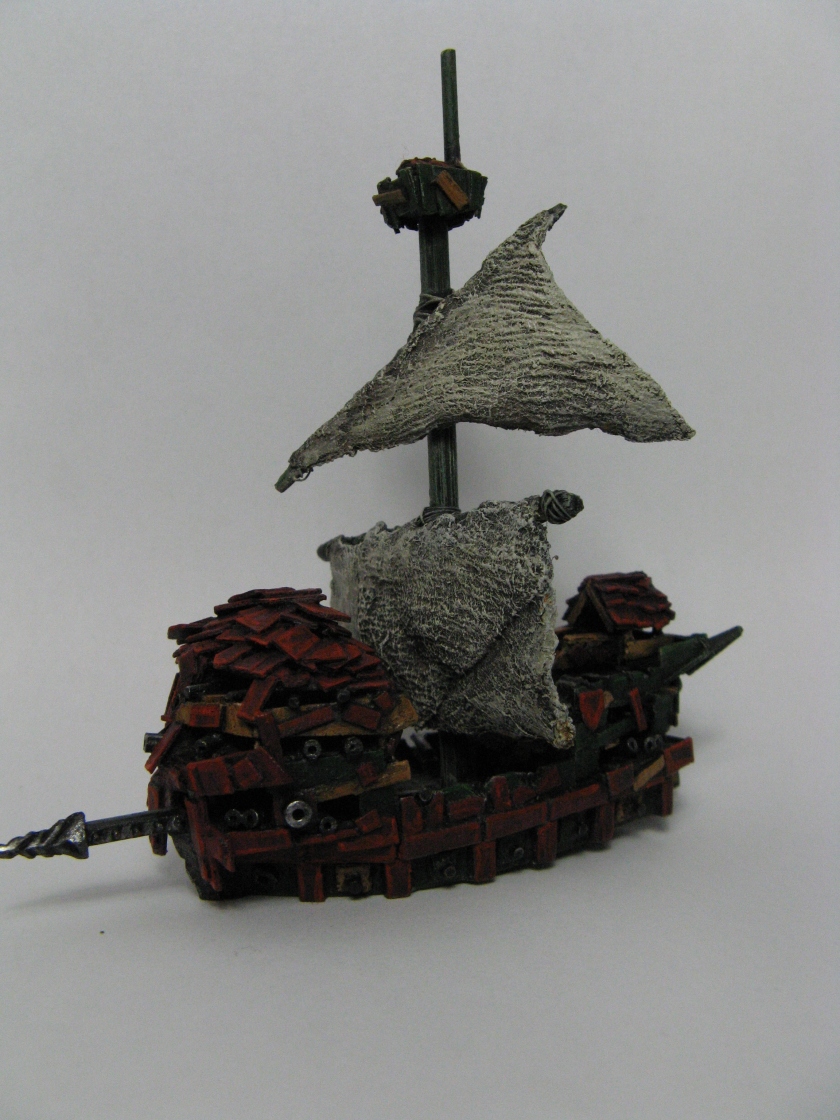 A work in progress shot of the Ork Hulk

This model is made entirely from bits of balsa, some very (paper) thin wood from the modelling shop (which I have found to be marvelous for building ship models), bits of plasticard tubing and copper wire (for the cannon), chamois leather (for the sails) and a wodden barbeque stick (central mast).  The whole thing is stuck together with copius, copius amounts of super glue.  I probably scraped 20ml of the stuff off my fingers during the build!

This is still WIP as I have not finished the paintjob to my satisfaction just yet – this one is a labour of love after all rather than necessarily a gaming piece.  I think you will agree that it also needs a black flag on the crows nest proudly displaying the “Jolly Ork”. 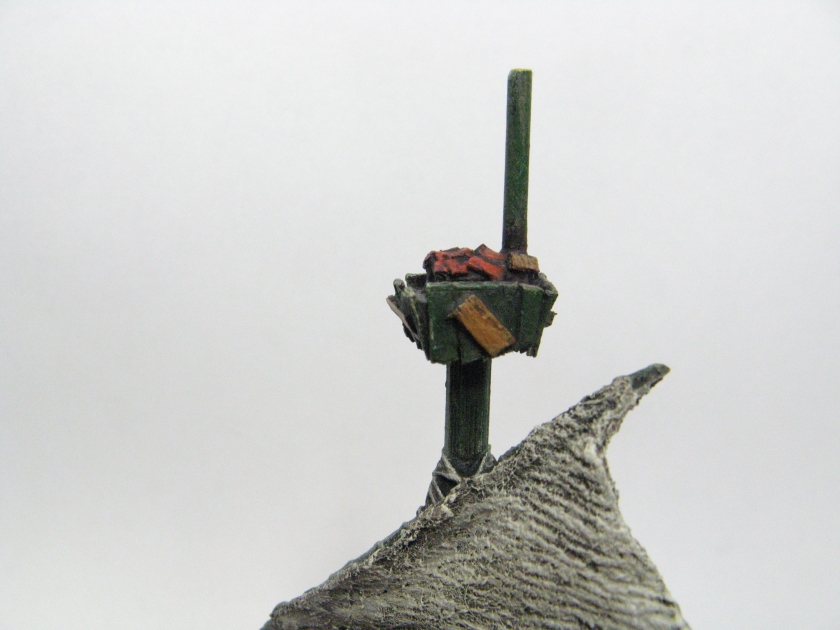 Waiting to fly the Jolly Ork!

Design wise I choose to base the concept on the ship being more like an Ork version of the Empire Greatship rather than the direction GW took with the Orks in Man O’War.  The Ork fleetlist for that game was very poor with characterised by underpowered ships or ridiculous suicide ships more a danger to the Ork player than the enemy.  The models for their part reflected the pathetic fleet list and most of the ships are reminisant of a floating outhouse.  For some reason the Ork ships were stuck with using catapults which is utterly dull – especially considering that the box art for the game clearly shows Orks crewing a ship with cannon!  If I ever make more models for this fleet with the intention of using it in anger I would use the Empire fleet list and thus am more likely to base any future Ork ships on the Empire designs.  Cannon galleys, mortar galleys and other such goodies are a lot more appealing for some Orky modeling.

An Imperial Guardsman inspects detail of the aftercastle (or aftcastle)

I will add some better pictures of this when I finish it off in the next couple of weeks.  I also made some Brettonion Corsairs from scratch which I will blog up whenever I get the nautical modeling urge to complete them.