As part of the preparation for Knavecon 2014 we ended up going for a Mordheim participation scenario which calls for livestock.  Last Saturday I attempted to buy some cheap plastic animals to be said livestock.  I was looking for the kind of plastic pigs, cows and sheep that we had as small kids.  This proved to be a tall order as I could not find a single diminutive creature to fit the bill.  Seeing as I had already spent half the day going around the city I figured that it would be a better use of my time to just sculpt some tiny critters and cast ’em up using Gildeo Siligum to create the mould and Prince August Model Metal lead/tin/bismuth alloy.

After getting to this stage I had some issues with the moulding process as the legs were a little too long to get a good 1 piece casting what with the hard to ventilate air pockets.  When I feck things up I just chalk it up to experience and move forward, such is the way of learning the ins and outs of casting.  Like all things the more experience you get fecking things up the less you feck it up in the future. 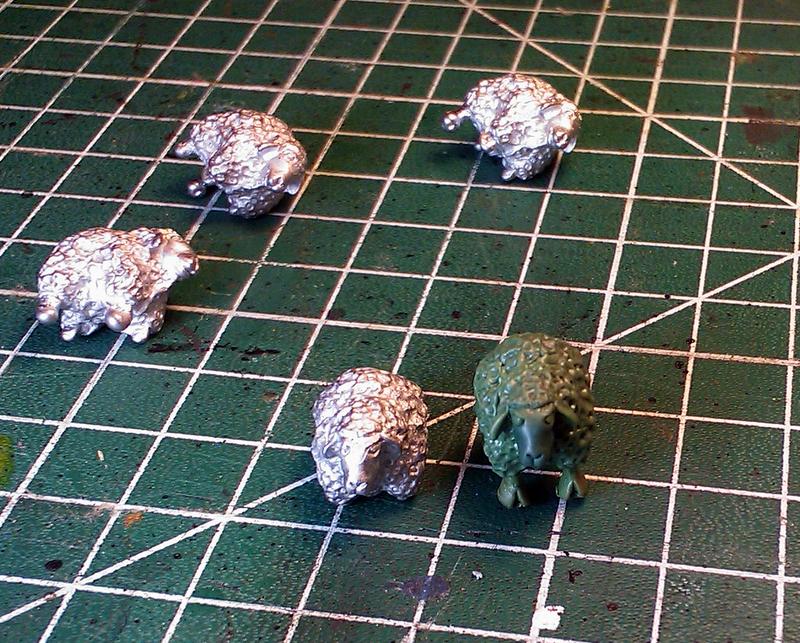 in order to get a decent casting I ended up chopping off the legs and creating two moulds, one for the torso and one for the 4 legs.  The legs are simple and generic in design so that it matters little which side of the body they attach to – I basically cast as many as I could and put them in a big pile ready for cleaning and sticking to the sheep torsos.  Sticking the legs on is a little tedious, this would not be a desirable feature of a full production model! 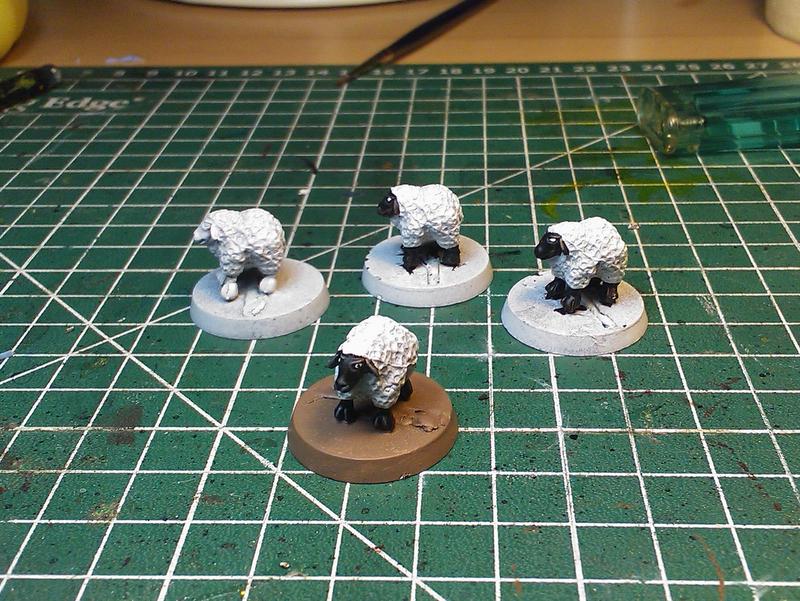 So the end result is pretty good given the short time frame for execution of the idea.  As sculpts go it’s a little bit rough in places (although still way better than many so called professional sculpts I have come across over the years) but as I am under pressure to churn them out quickly they are perfectly fine for the job.  If I ever make some production animals I can obsess over the minute details then!

In terms of design she is specifically tailored for the vertically challenged races such as Halflings.  Obviously I favor caricature and slight anthropomorphic feel to my creatures over realism.  It makes more sense to me for animals for a fantasy game to be more like kids toys or TV shows than to be realistic looking.

I like to spend as much of my time wargaming in side splitting laughter as possible and cute characterful models really help.  If this kind of sculpt is not bringing a smile and a chuckle to the audience then I am not doing it right!

All in all how could I not be happy with how this one turned out?  Now to get busy making a flock of them for Saturday!