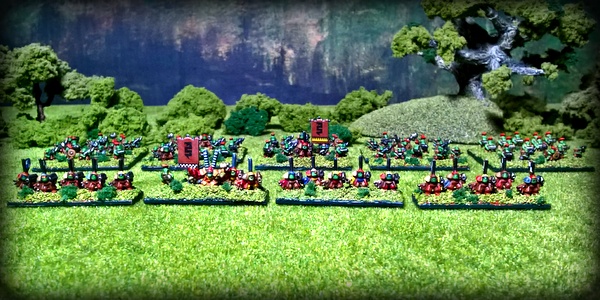 Recently I have been filled with desire to work on an old bucket list project of mine, a nicely painted Epic 40,000 force of orks.

I intend to play some games with them using the open source NetEpic rules (with some house rules tweaks to it to get rid of the templates as they tend to slow up the game and effectively reduce the available table space).

Working on some scenic items to build up the battlezone thematically alongside the army would be ideal also.

To begin with, I decided that I would work on a Snakebite Clan as I have never in all my time painted a single Snakebite, and now I would paint 105 of them at 6/7mm (Epic scale is in fact a bit wobbly with sizes often dramatically different for infantry models – your average person would probably never notice it anyway).

As the Snakebites are supposed to be staunch traditionalists, I wanted them to have a lot of browns, green and metal with a smattering of primary spot colours – like classic fantasy orcs really.

The banners were done by carefully cutting out GW Ork transfer sheets to fit. The Nobz got a bit more attention than the boyz. I converted the Epic Ork Warlord to carry a power klaw cut from an Ork dreadnought. In game terms you have 4 identical stands but to my mind the whole Ork Clan should have the Warboss as the focal point, so there he is!

As there are not a huge variety of models available, I decided that I would make my Snakebites unique by sculpting a special Ork to represent them.

I did a quick and dirty casting in lead from this – the detail is not quite as crisp as the original but more than adequate to express the idea in miniature.

While I was working on him, I started working on an Ork for when I get around to doing the Goff Clan. I think he is adorable so far <3.

So that’s a solid 600 points of stuff to begin with. I am looking to add some Squiggoths to this lot and perhaps some Stompas (as they move at about the same speed as the infantry).